What is the Baltic Dry Index? In 1744 the Baltic Exchange, a meeting point for merchants and captains of ships, was established in the City of London. The organization was located at 24-28 St Mary Axe, London, until an IRA bomb destroyed the building. Today it is at number 28 and has offices throughout Europe and Asia.

The Baltic Dry Index is one of the indexes provided by this organization, the most famous because it is generally considered as an early indicator of economic recessions. Other indexes are Baltic Exchange Capesize, Panamax, Supramax, Handysize, Dirty Tanker and Clean Tanker. To get an idea of the importance of these indices, it is necessary to mention that 80% of all goods and merchandise are transported by boat.

What is the Baltic Dry Index?

This index is an average of the prices paid for the shipping of raw materials on the 26 routes around the world, which are limited to the Baltic Exchange, the global market for freight trading. That is, cargoes such as coal, sugar, metals, etc. It reflects both the demand for the mobility of raw materials and the supply of ships, the transportation of final goods or container ships is not taken into account for the calculation. The volatility of this index is higher than that of container ship indices.

The index is representative of the entire maritime goods transport market and can therefore be used as a general economic indicator and as a substitute for the evolution of global production, with nuances.

The Baltic Dry Index is the successor to the Baltic Freight Index, which began operating on November 1, 1999. Since July 1, 2009, the index is composed of the average freight rates of Capesize, Panamax, Supramax and Handysize, which are types of merchant ships. Their names refer to the ability to transit the Panama Canal. The Handysize and Supramax have no restrictions, the Paramax is at the limit and the Capesize can not cross it and must travel around the Cape of Good Hope or Cape Horn.

Baltic Dry Index: Calculation
In June 2018, the weights of the different types of boats were readjusted and the Handysize removed. The weights were: 40% Capesize, 30% Panamax and 30% Supramax.

The price is based on the contract for travel time, not per trip.

As for the former, they should be highlighted:

Depreciation (the cost of the vessel between the expected years of use minus the corresponding part of the demolition value at the end of its useful life) plus the cost of financing the capital used to build the vessel (interest rate).
Crew salaries, insurance, travel expenses, etc.
Supply.
Spare parts, oil, etc.
The corresponding daily allowance to cover repair costs, dry dock, etc.
Regarding the specific costs of the trip:

Te Pude Interesar
How to use Bitcoin and not die trying

The most important, fuel.
Port taxes (can be discounted when calculating the price).
Stevedores.
Loading/unloading.
Toll or channel fees.
Other costs such as risk premium in a situation of armed conflict, taxes in general, etc.
Important considerations
The Baltic Dry Index has the advantage (or disadvantage) that, by not being able to trade in Baltic Exchange entities or non-member individuals, it is not exposed to speculative variations.

It should be taken into account that building a ship takes several years and is also extremely expensive, an economic boom that would encourage the production of new ships could have its effect on freight prices years later. The difficulty in repackaging this invested capital, as well as the cost of its production, makes the cost of freight little determined in the short term by variations in supply (outgoing or incoming capital). However, it is very determined by demand and that is why it is considered a leading indicator of the market, since less transportation of raw materials means, a priori, less production, etc.

One of the most important issues to highlight is the logical correlation between the price of oil and the BDI (Baltic Dry Index). Necessarily, the cost of oil will be a determining factor of the price, however, it is important to emphasize the slowness of movement of supply.

In this respect, although at first glance it may seem logical that the IDB, at the very least, could indicate a recession, but if we add constraints such as the supply of ships and the price of oil, we quickly realize that we should not jump to conclusions. This does not prevent it from being very useful in measuring the state of the economy and the markets.

Te Pude Interesar
What is the difference between a trader and a broker?

There is a similar relationship with soybean until 2009, from then on it begins to diverge.

Finally, more recently, we can observe a decrease in the BDI due to the slowdown in imports of Chinese raw materials. Let us remember that China is the second largest economy in the world and the main exporter, with exports that reached 2,263.63 billion dollars in 2017. A decrease in the arrival of raw materials may foresee a certain stop in international consumption and investment or a certain substitution of imports. 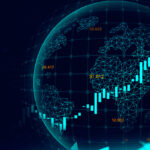